Such a dark cycle of news, my soul is weary of listening to the usual radio programs. But freelancers need company. And voices are comforting to hear. So what to do. I thought about my earlier studio days when my drawing board was pivoted towards the old TV in the corner. I sometimes used to watch it when deadlines weren’t so urgent. Daytime even ran old re-runs, mostly old detective shows like Perry Mason, Columbo or Quincy. They had simple, predictable plots but somehow they were satisfying and stood in nicely for colleagues.

Times changed and when Lucy arrived, I needed to focus when I had precious studio time. The old TV died and I let the noon TV habit die out, too.

Recently, my husband reminded me about The Rockford Files, another noon show I liked with the mild-mannered Private Eye Jim Rockford, solving cold cases from his in his beat-up trailer by the sea. James Garner, who played Rockford, had such an easy smile and manner. A friend who worked on crews in the “movies” once met him and said he was the real deal, a really nice man. Hmmm, my husband said, maybe I should pay Rockford a visit again…

So now, for awhile, courtesy of Hulu, it is me and my lunch in sunny LA, circa 1960’s, watching Rockford chasing down the bad guys, always ending up on some desert road getting shot at, or hauled into a police station.  I like Jim a lot; he could have been one of my uncles in looks. He'd make me feel safe. I’d hire him in an instant, if I ever needed to get out of a pinch.

The late sixties is my kid-hood era. The episodes are full of nostalgia. The fashions in particular just kill me. The men’s jackets have the fattest lapels and the ladies all run around in slinky polyester shirts. The businesses on the streets- 76 gas, small mom and pop take outs, etc., all belong to a long ago time. And the sound of a telephone almost makes me weep in mourning for a world that used to move so slow.

Don’t call me at noon for awhile. I’ll be in LA with Jim. Maybe we’ll fish for yellow-tail on the dock close by his trailer, or have a beer and a hot dog with his old dad. Or take a walk on the beach in the sunset. My deadlines can wait. 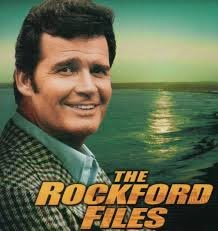 Invite me over for some fishing and nostalgia, Claudia. I'll share that lunch with you. You capture the flavor of the era perfectly.